If you wish to get divorced in California, you must fill out and submit your divorce petition with the required information. This includes stating the grounds for the divorce, which must be acceptable under state law. California is a no-fault divorce state, meaning that one spouse does not have to have done something wrong for you to get divorced. You just have to state that you cannot get along. In legalese, this is called irreconcilable differences.

What Does Irreconcilable Differences Mean?

You do not need to prove irreconcilable differences to get divorced in Orange County. You only need to state it on your divorce petition as the grounds for your divorce request. You also don’t need your spouse’s cooperation to get a divorce. Only one party needs to file the paperwork. Even if your spouse refuses to sign the divorce petition, the divorce will proceed anyway. The fact that you can’t agree on the divorce further emphasizes that you have irreconcilable differences.

Why Is California a No-Fault State?

Irreconcilable differences is a no-fault grounds for divorce in California. It prevents you from having to prove that your spouse is at fault to get divorced. You don’t have to show that your spouse cheated on you or abandoned you, for example. California and many other states did away with fault-based grounds for divorce cases. This makes it easier to get divorced since the filing party doesn’t need to prove fault.

Under California’s current no-fault law, it is easier for people in unproductive or abusive relationships to get out. It is also easier for couples who have simply drifted apart to end their marriage and move on. Irreconcilable differences helps to create a smoother and faster divorce process. Regardless of extenuating acts and any proof thereof, you can get divorced in California using irreconcilable differences. 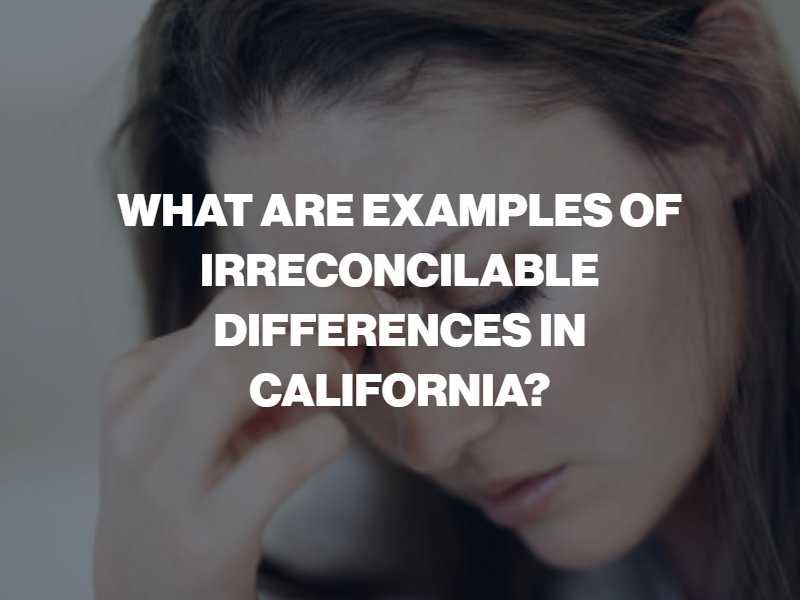 What are Examples of Irreconcilable Differences?

In essence, if you are no longer satisfied with your marriage and don’t believe reconciliation is possible in the future, you can get a divorce in California.

How Can a Family Law Attorney Help?

Although you don’t need to prove marital fault to get divorced in Orange County, you will have to go through many complicated steps and legal processes. This starts with the confusing divorce petition, which is many pages long and needs to be filled out accurately and correctly for a successful divorce. A divorce lawyer can help you with this paperwork and with citing the correct grounds for your divorce under state law.

If your spouse is at fault for your divorce and you wish to incorporate this into your divorce proceeding, a lawyer can help. Despite California’s no-fault divorce law, marital fault could still impact your divorce in a few different ways. Evidence of adultery or domestic violence, for example, could impact court decisions such as spousal support and child custody. For more information about fault during your divorce case in Orange County, contact Boyd Law to request a free initial consultation with an attorney.

How Can We Help You?

* ALL FIELDS ARE REQUIRED

To protect you from COVID-19, we are offering a quick & easy remote intake process. Click here to learn more.